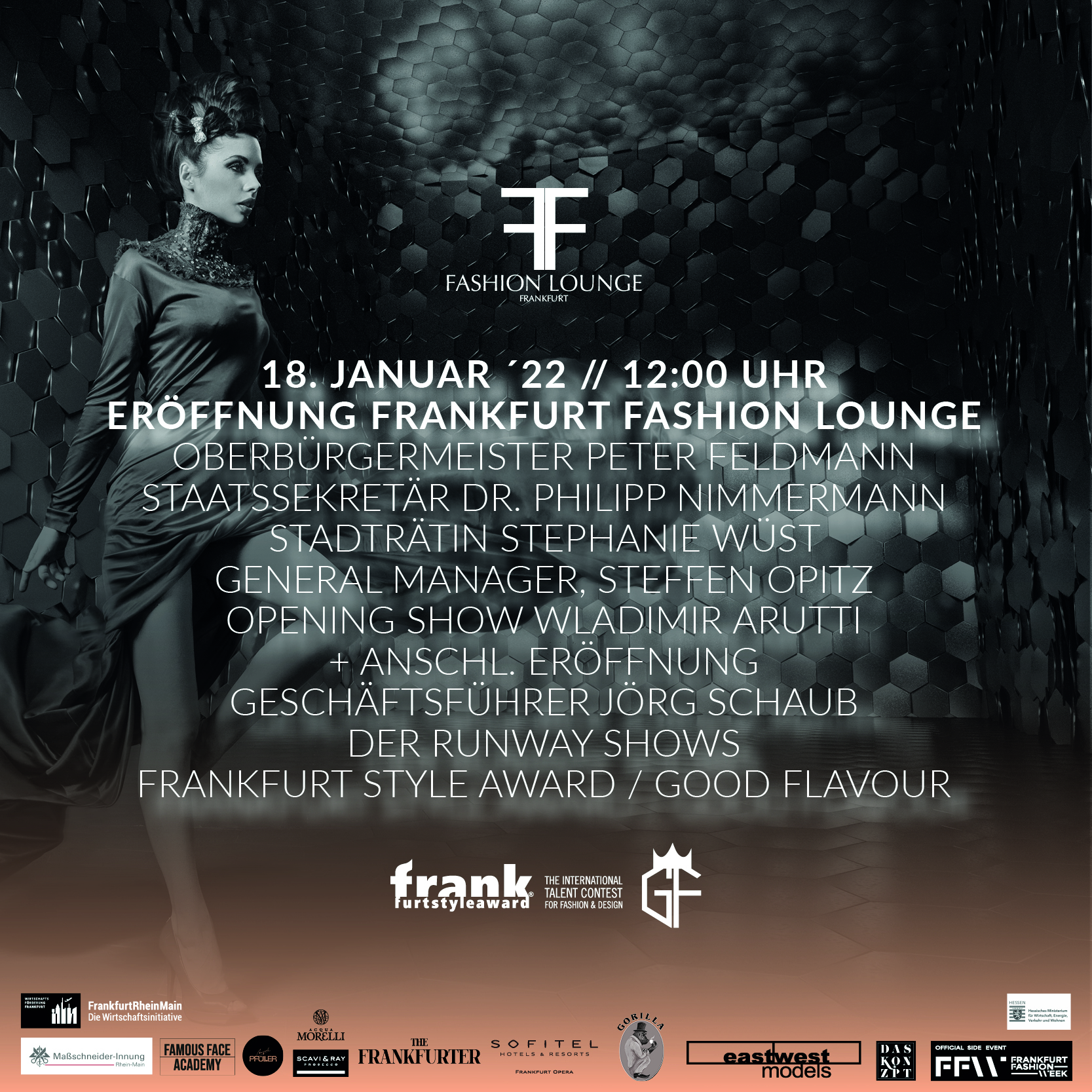 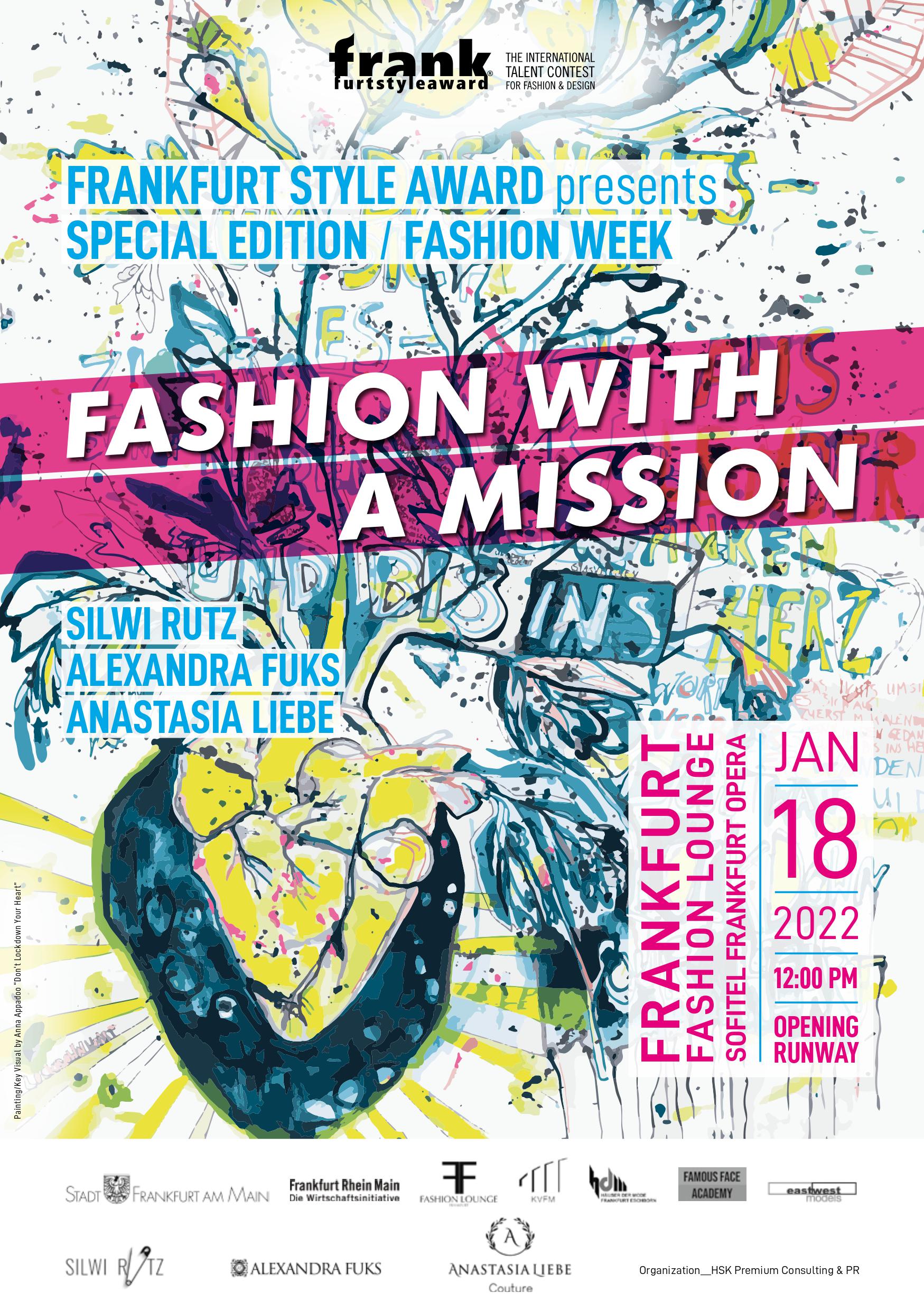 Fashion with a Mission

On January 18, 2022 at 12:00 pm, outstanding talents from previous years will present their collections. They are all winners of the international young talent competition for fashion & design and have since successfully founded and expanded their designer brands.

“The FRANKfurtstyleaward has been making history in promoting young talent in fashion & design since 2008. In its 2nd Special Edition, three successful designers present themselves with their established labels. They started their careers on the stages of the international competition in Frankfurt,” explains Hannemie Stitz-Krämer, initiator and organizer of the FRANKfurtstyleaward when welcoming the guests of the Opening Runway of the Frankfurt Fashion Lounge, the majority of whom are friends and supporters of the Frankfurt young designers project. She expressly thanked the initiator Sevinc Yerli and her long-time supporters, partners and companions Sevgi Schäfer and Carlos Streil. They made possible the opening of the shows with 21 models of the EastWest Model Agency and the fascinating styling of the Famous Face Agency.

The FRANKfurtstyleaward show “Fashion with a Mission” presents seven models each from:

“With this second talent show, the FRANKfurtstyleaward demonstrates its invaluable potential as a career springboard for exceptional designers as well as a talent exchange that makes innovative ideas, creativity and outstanding creative achievement visible,” emphasizes Hannemie Stitz-Krämer. “Under the patronage of the City of Frankfurt, a sustainable institution has been created in more than a decade, which annually challenges more than 1,000 fashion schools worldwide, their students and alumni to deal with socially relevant and “Zeitgeist” topics with its calls for entries, thus providing impulses for the fashion industry.”

Since 2008, the FRANKfurtstyleaward has been a flagship project for fashion in the FrankfurtRhineMain metropolitan region. The planned 13th International Call for Entries of the FRANKfurtstyleaward 2022 with the motto “Windows of the New World” under the patronage of City Council President Hilime Arslaner-Gölbasi and Lord Mayor Peter Feldmann has been postponed and will wait for the next Frankfurt Fashion Week in July.

Since 2008, the FRANKfurtstyleaward has been a flagship project for fashion in the FrankfurtRhineMain metropolitan region. The planned 13th International Call for Entries of the FRANKfurtstyleaward 2022 with the motto “Windows of the New World” under the patronage of City Council President Hilime Arslaner-Gölbasi and Lord Mayor Peter Feldmann has been postponed and will wait for the next Frankfurt Fashion Week in July. 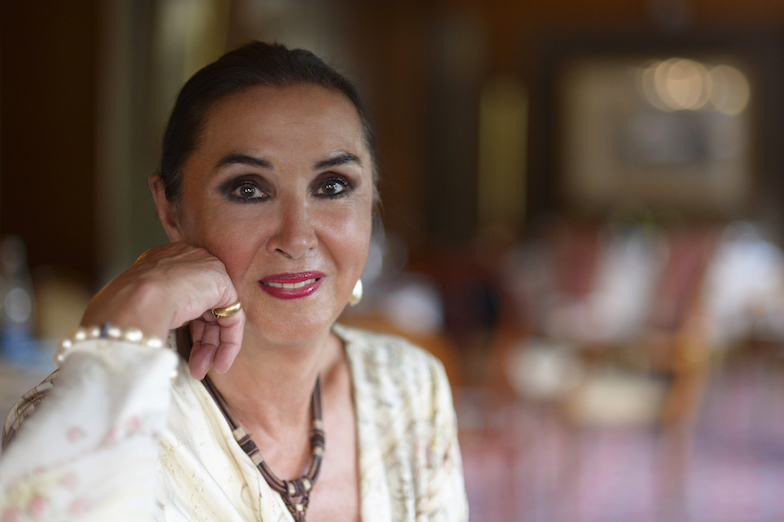 For more than three decades she advised international market leaders, countries and tourist destinations, associations and institutions. Her worldwide commitment made her the initiator and president of agency networks as well as professional associations and a specialist for international image PR and corporate responsibility campaigns such as the Henry Ford Conservation Award, “Jugend trainiert für Olympia” or the campaign “Kinder stark machen”.

In 2008, Hannemie Stitz-Krämer initiated the FRANKfurtstyleaward, the young talent competition for fashion & design. In 2019, she founded HSK Premium Consulting & PR and, as an initiator and source of inspiration, is addicted to art in fashion as well as the topic of fashion and lifestyle. Together with her partners and supporters, she is committed to the non-commercial FRANKfurtstyleaward and its international talents and newcomers. She is currently steering this flagship project for fashion & design from the FrankfurtRhineMain metropolitan region through the Corona pandemic.

History of the FRANKfurtstyleaward brand

The FRANKfurtstyleaward was born in 2008 out of a PRP client order to introduce a lifestyle drink in the trendy gastronomy. Hannemie Stitz-Krämer thus became the initiator of one of the most important international competitions for young fashion & design talents. The FRANKfurtstyleaward stands for a sustainable talent and career platform that promotes innovative ideas, creativity and outstanding creative performance.

With the FRANKfurtstyleaward, the FrankfurtRhineMain metropolitan region, under the patronage of the City of Frankfurt (represented by Mayor Peter Feldmann and City Council President Hilime Arslaner-Gölbasi) as well as by the previous main sponsors – such as, for example, Messe Frankfurt, Fraport AG, Wirtschaftsinitiative Frankfurt Rhein Main, Häuser der Mode – has grown once a year into a sustainable hotspot for the best fashion & design schools from Germany and all over the world. Highlights were the gala events and award ceremonies in the Frankfurt Forum at Frankfurt Airport, in the Alte Oper, at Messe Frankfurt’s Tendence and in the Kaisersaal of Frankfurt’s Römer, as well as the partnerships with Vancouver Fashion Week, Addis Ababa Fashion Week and the New Fashion Zone in Ukraine.

Frankfurt Fashion Week is postponed for the second time. The good news: The FRANKfurtstyleaward 2021/2022 lives – it set the stage in July 2021 for two exclusive events for the Best Talents from the 2020 competition under the motto “BENEFITS of CHANGE” and heralded the motto for 2022 “Windows of the New World” with a show by the “Heroes of Tomorrow”.

Before that, FRANKfurtstyleaward launched a series of Special Editions “KUNST IN MODE” together with longtime partners Sevgi Schäfer, Famous Face Academy, and Carlos Streil, EastWest Model Ageny. The Fashion Weekend took place for and with the fashion brands from the FRANKfurtstyleaward community and invited guests at the Kunstverein Familie Montez.

The second Special Edition under the motto “FASHION with a MISSION” will take place on January 18, 2022 at the opening of the Frankfurt Fashion Lounge at 12.00 noon at the Sofitel Frankfurt Opera.

The press release “Fashion with a Mission” as well as the information about Hannemie Stitz-Krämer can be downloaded as PDF.