The Call for Entry for the 10th anniversary of the FRANKfurtstyleaward has started!

The International Talent Contest for Fashion und Design invites students from 600+ Fashion and Design Schools worldwide to submit their creative ideas according to the leading theme “MODERN REALITY”. In today’s digital age, the true status symbols no longer revolve around the question: ‘what do I have’, but rather ‘who am I’.  Fashion no longer merely cares about people being comfortable or stylistically confident at their work place, while exercising or dating. Find your own identity rather than being defined by a label.

Upcoming designers from all around the world can submit applications with exceptional sketches and concept ideas within the categories #working, #sporting and #dating. The application deadline is March 1st, 2017. 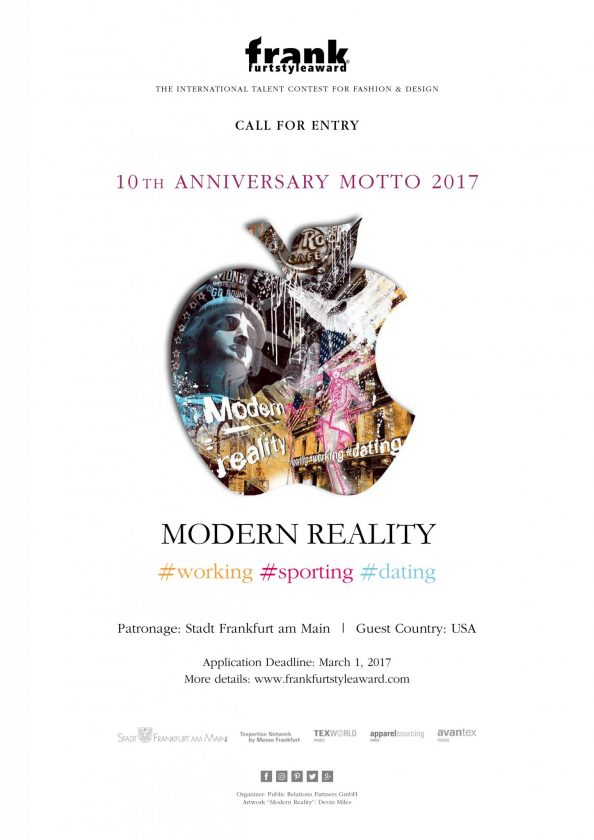 Designs are evaluated by an international and interdisciplinary jury and the finalists will be announced in April 2017 and invited to the big Gala Finale Show in September 2017.

Since its beginning in 2008 the FRANKfurtstyleaward has grown to become a globally established competition and one of the most significant career platforms for up and coming designers. The FRANKfurtstyleaward stage is a valuable catalyst for innovation and markets of the future, of which the economy and industries can profit. Each year the outstanding creative achievements of 60 young talents are merged into a TOP60 COLLECTION, which enchants exhibitors and visitors alike at leading trade fairs for fashion, art and culture worldwide. Succeeding France, Italy and China as the awards previous partner countries, we are delighted to welcome the U.S. in 2017. FRANK® – THE TROPHY, the highest prize of the competition, will be awarded at the glamorous AWARD GALA.

Click here for more information about the Call for Entry and the Application Guidelines.